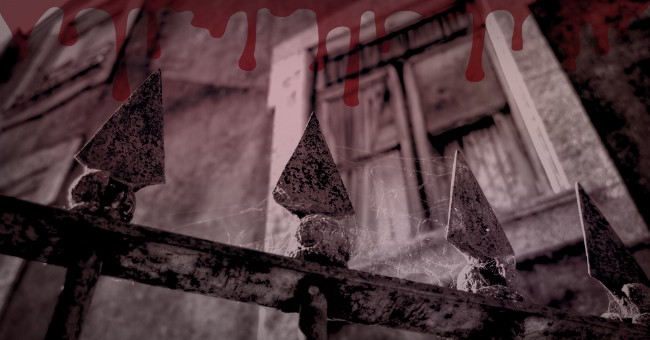 5 Most Haunted Places in Mid Missouri

Halloween is getting closer and closer. Ready for a good scare?  There’re some incredibly frightening places right here in Mid-Missouri. Now I’m not talking about fake “haunted houses”. These are the real deal. Real haunted and creepy places that you need to make a visit to this month!

Located right next to Whiteman Air Force Base is the town of Knob Noster. As the story goes, there was a crabby man who had a slave that was liked by everyone in the town. However, one summer the slave was nowhere to be seen, and the man never would talk about what happened to him. One night there was a lightning storm and someone reported they’d seen a lantern moving slowly along a ridge of Knob Noster as lightning struck the hill. The next day, several people went up to check on the man and found him dead with a look of terror on his face. Not long after, people reported that a lantern was moving along the ridge during storms. The ghost lantern can still be seen on stormy nights. Have you seen it?

Thespian Hall is the oldest operating theater still standing. It holds a special place in my heart because it is located in my hometown of Boonville. Built in 1857, the building has been used as a theater, dance hall, library, Civil War hospital, and church to name a few. But the hall also hosts something else. Ghostly women have been known to sit in the audience at rehearsals, listening and then disappearing from the seats. Other ghostly occurrences at Thespian Hall known throughout Boonville are the moving wig stands in the changing room, which turn and face the mirrors when no one is there to move them.

Located in Bunceton, the 116-year-old mansion was built for Nadine and Charles Leonard, and has about 30 rooms, thousands of acres, and barns. The Leonards loved to entertain, and would often hire an orchestra and invite their friends to dance away the night.

One of my friend’s sisters used to give tours of the mansion and we celebrated his birthday at the house one year and spent the night. During my stay, there were things that happened that were hard to explain. Lights in many rooms would turn on and off, sounds of doors being shut could be heard, and there was this really creepy suit of armor that looked like it was in a different position every time you went back into the room.  Sometimes music and the sound of people laughing can be heard outside the mansion. Would you stay there?

Located right here in Columbia was a tavern from the 1820s. It was a place that many travelers would come, and they were often booked up. However, one room was always empty. The tavern keeper refused to rent it out because the room was haunted. There were complaints of blankets being pulled to the floor, and crying coming from the dark corners of the room. As the story goes, one night a Priest stayed in the room and experienced the same thing others did and asked who was there. A young boy spoke back to him, stating he had been killed there and put inside the wall. The next day, the wall was torn down, and the skeleton of a young child was discovered. From that point on, the hauntings stopped.  The tavern has since been torn down. However, it is being rebuilt at Boone Monument Village in Marthasville, MO.

The Fayette University has been listed as the 6th most haunted college in the United States and that is no joke! It’s also my alma mater. There have been many deaths on campus from Conductors dying of heart attacks, to students hanging themselves from the stresses of college. Many people still claim to see the ghosts of these individuals. Don’t get me started on the library, which just so happens to be one of the most haunted places on campus. If you stay in the library after hours, noises of tables being dragged across the floor can be heard along with the sounds of people walking and mumbling. Knocks on locked classroom doors can also be heard.

So there you go. These are easily 5 of the most haunted places in Mid-Missouri. How many have you been to or will be checking out this Halloween? What places did I miss?  Comment below and share the scare!