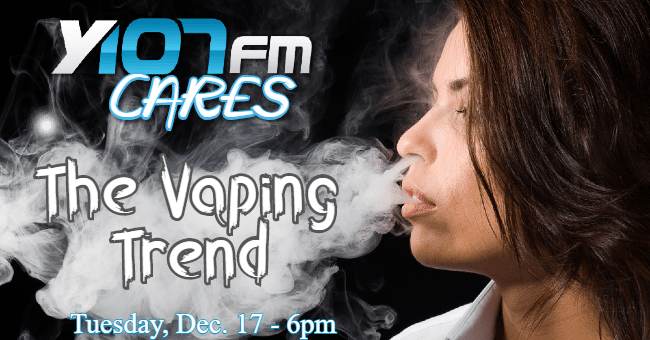 Catch an encore airing of our special Y107 Cares: The Vaping Trend Sunday night 7p on 106.9/Y107 and on our facebook page facebook.com/y107fm

Since our special originally aired on 12/17 more news has hit the airwaves regarding vaping and e-cigs.

“President Trump is expected to sign it into law as part of the overall spending package. Some advocates warn that more action is needed to reduce teenage vaping of e-cigarettes.”  Nineteen states  and more than 500 cities(including Jefferson city and Columbia)  have already raised the age to 21. Setting it as a national age limit is viewed as an effort to appease those who are calling for a full ban on e-cigarettes or a flavor ban to prevent addicting a new generation to nicotine.

Vaping has become a hot issue across the country, especially with Y107 listeners. And there’s so many questions.

Why is it causing kids to be rushed to the hospital?

Why are people dying?

Is it an epidemic?

Is it worse than smoking?

What are the biggest concerns?

We don’t stop the music often.  But when there’s such a concerning topic affecting our listeners like this, we decided there’s no other choice.  Join Y107 at 6p on Thursday, December 17th for Y107 Cares: The Vaping Trend.

Y107’s Cosmo will take an in-depth look into vaping, and the many concerns and issues. He’ll be joined by guests and experts helping us all understand the concerns and vaping’s impact on our youth. The program will also air live on Y107fm on Facebook, where you can join the discussion and interact with the Y107 airstaff and other listeners.

Missed the episode?  Download it now as a Podcast. Search “Y107 Cares” on Apple and Google Podcasts. Or click to listen to each of the 4 parts below.

(1/4) Join us as we discuss the hot topic of vaping and its impacts.

(2/4) Join us as we address the hot topic of vaping and its impacts.

(3/4) Join us as we discuss the topic of vaping and its imapcts.

(4/4) Join us as we discuss the hot topic of vaping and its impacts.