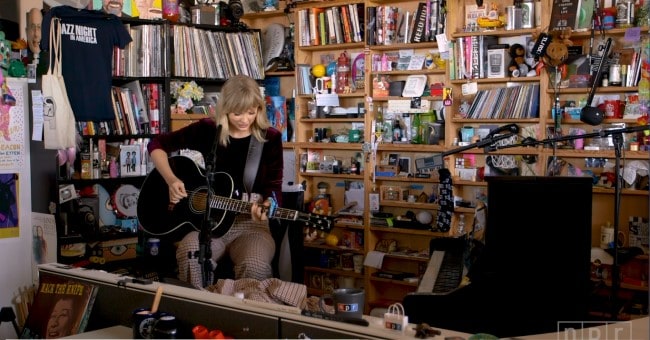 Why “Tiny Desk” Is A Must Watch

Carson October 16, 2019 Carson's Blog, Videos, What We Talked About Leave a comment

Big news this week as Taylor Swift announced she’d be featured on NPR’s “Tiny Desk” series. Unfortunately, that left many people also asking, “What is NPR’s ‘Tiny Desk’?”  If you didn’t know about it before, here’s WHY you need to keep it on your radar.  And this isn’t just because of Taylor Swift btw.

This is one of my favorite corners of the Internet. ~ Taylor Swift

What is NPR’s Tiny Desk?

You ever been to an overcrowded small club to hear your favorite singer (not band) perform, but it was way too loud from all the people to truly embrace the concert?  That was exactly what a couple of people who worked for NPR (National Public Radio) thought. They joked that the artists should just perform at the show host’s desk in Washington DC. It’d be a truly stripped down, intimate experience. And so, in 2008, that’s exactly what happened. 11 years later, they series is up to almost 900 performances.

Why Should I Care?

Sure, it’s rare that BIG names (ex: Taylor Swift) perform.  Honestly, almost every performer so far would never be considered a pop star, minus Taylor. However, that doesn’t belittle the talent of these guests. I’d argue many of these artists are some of the best talents in the world today, that many have never heard of.  It’s like when you watch the late night talk shows, and they bring out a talent you’ve never heard of. And then they blow you away.  It’s like that. So many of these talents are ones that could EASILY play Roots and Blues, and you’d walk away bragging to your friends about how good they are. These are the Tiny Desk artists, waiting for you to connect to their every word. And be the only one of your friends who knows them. And THAT is why you should care.

As Taylor said as well, it’s also an “opportunity for artists to decide a different way to showcase their music,” and tell you the stories behind the songs and the album. (Oh how much we miss VH1’s Storytellers). For Taylor personally today, Tiny Desk was an opportunity to “show you guy how the songs sounded when I first wrote them.”

If you love the power of a singer/songwriter, and crave discovering your own personal FAVORITE new artist, you can NOT miss any of the Tiny Desk series, Taylor Swift or not.

To get you started, check out these top rated performances from artists you probably know: