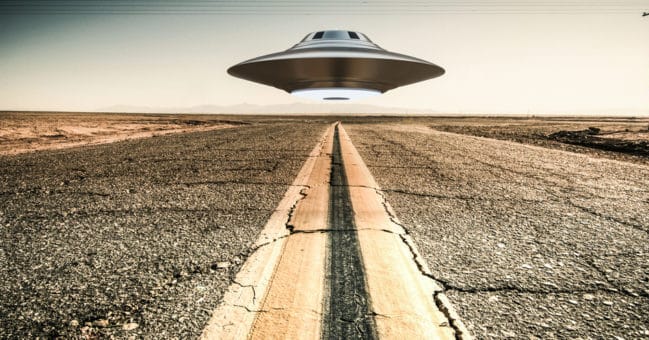 It’s the big weekend of “Storm Area 51”. What started as a Facebook joke quickly became something else entirely, and now, people are descending on two small towns in Nevada to “experience” the events.

The event officially kicked off last night, and what we’ve seen so far is a bit different that what was originally expected.  While authorities are anticipating no more than 30,000 (about as much as local authorities can handle), turnout has been well under that, so far.

There 2 very different situations going on, on either side of Area 51.

In Rachel, a town of 50 full time residents, there is one business: the Little A’leInn, a restaurant/motel.  When the original creator/Facebook guy backed out and launched a major Vegas EDM fest (which went off fairly successfully last night), the restaurant owner took over. As of last night, she was ecstatic for what has already occurred.

Apparently about anywhere from 40-150 people (depending on who you believe) did “march” on one of the gates at around 3am last night, peacefully without incident.  It was more for selfies and the fun of the situation. By law, they can gather on the public land in front of the gate, just not cross.  And there was clearly a presence making sure THAT wouldn’t happen. Apparently 1 was arrested for indecency for relieving himself on the fence. Another was detained but released for apparently ducking under the fence thinking they were funny??!

This guy, Mick Akers, has been posting some great pics on his Twitter account to keep us all in the know. Well, at least for now, as cell service will quickly be failing as more people show up. The town just can’t hold it, as it’s only a town of 50. They were gone by about 5am. BTW, this is about 95 miles from Rachel/Hiko.

There are a couple other pictures that have gone out showing a tank and helicopter and massive crowds. Those are false!

As for Friday now, more people have been showing up, the stage is up, there’s a bunch of artwork, and a lot of random milling around. But all remains peaceful. And yes, there’s plenty of Naruto running, as evident in this moment that’s been going viral.

While the event in Rachel seems to be the main Area 51 event, there is also an event in nearby Hiko (about 45 min away), dubbed “Basecamp”.  This event will be more low key, with music, speakers, and movies. Hmmmm, sounds exciting… However, they DO have a fake gate set up here, which you can Naruto Run through to your heart’s content.

A pair of attendees from L.A. “storming” the mock Area 51 gate at the Alien Research Center in Hiko. Something that will be a popular occurrence this weekend. #basecamp #area51 #stormarea51 pic.twitter.com/0Qs7EnZsag

The problem with both of these events is the people themselves, who are unfamiliar with what they are walking into in the desert. The elements are unforgiving. It goes from really hot, to really cold at night. They’ve been dealing with rain and strong winds thus far, making things difficult.  There’s also the concern of critters, snakes, and scorpions that people need to be prepped for, and most likely aren’t. Thankfully lots of police officers and security are on hand, as are paramedics. However, the closest hospital is quite a ways away, and can only hold a handful of people. Literally there’s nothing around other than the Little A’leInn; no gas station, no grocery store, nothing. And the motel/bar can’t really feed many, so hopefully the attendees have come fully prepared.

As of the Friday afternoon, more have showed up in Rachel, as have more Patrol Officers to make sure the peace is kept, as local residents overall aren’t too happy with all this. We’ll keep an eye in case anything changes. We still have a long weekend ahead, as peeps are not expected to disperse until Sunday. Maybe some of the Vegas goers from last night will trek out this way.

View from the entrance of the Little A’Le’Inn into the offsite parking and back to the Inn. #AlienStock #StormArea51 #area51 pic.twitter.com/1SfmmiQLsC