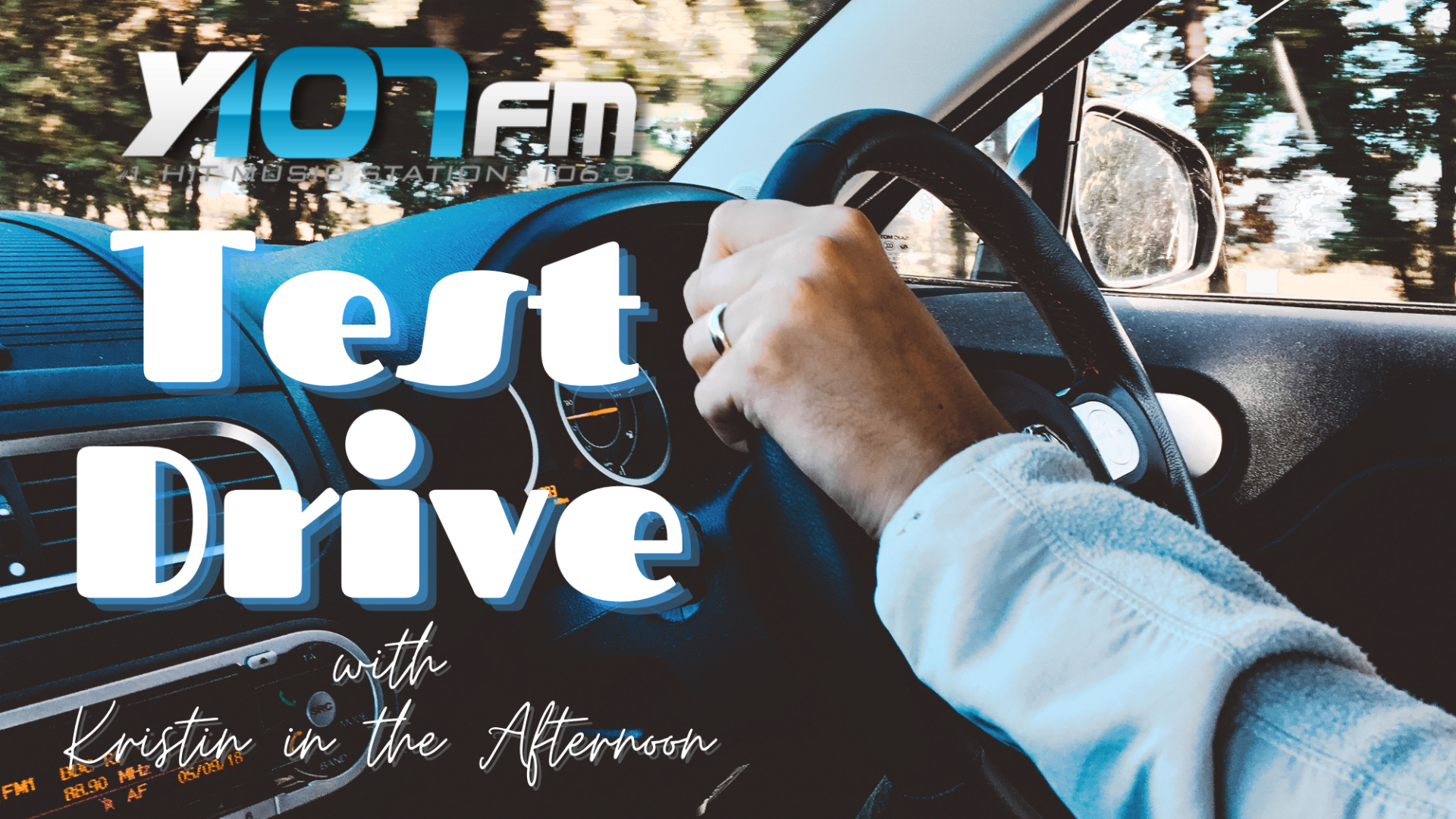 Kristin in the Afternoon’s Test Drive

On Tuesdays, Thursdays, and Fridays at 5:15ish, Kristin will Test Drive a new song, and YOU have the ability to tell us whether you love it and think it should be played on the station, or if you hate it and don’t want to hear it!

*Disclaimer: YouTube doesn’t always have the radio edit version of songs that we’d play on air, so this whole page has a NSFW warning!*

Harry Styles: As it Was

Pharell Williams: Just a Cloud Away

Doja Cat: Get Into It (Yuh)

The Weeknd: Out of Time

Gayle: Sleeping With My Friends

Tuesday, March 1, 2022
Actress Dove Cameron released a snippit of this song as a sound on TikTok and it BLEW UP! What do you think of Boyfriend?

If you’ve had a bad day and are in need of an upbeat AND uplifting song, then Lawrence has a song for you! This already has a lot of positive texts, but I’d still like to hear YOUR opinion on it!

Taylor Swift and Ed Sheeran have already have several collabs, and they just dropped another one! It’s definitely on the slower side of their songs… I can see it being Ed Sheerans NEXT first dance type of a song. And the video actually picks up after the Everything Has Changed video… the kids from that video are grown up and have gone off to separate colleges but they miss each other! But fun fact, it’s actually the SAME child actors as the Everything Has Changed video!

Ed Sheeran feat. Taylor Swift: The Joker and the Queen

Their album out in April is called WET TENNIS, which sounds odd, but it’s an acronym for “When Everyone Tries to Evolve, Nothing Negative Is Safe.” This is called Original Sin from Sofi Tukker, what do you think?

In the cold of winter, it sounds lik we’re starting to get all the EDM songs to dance to and warm us up, and Flume and MAY-A’s  “Say Nothing” is DEFINTIELY an upbeat song… but is it one you want to hear on our station? That’s up to you! Listen and tell me what you think in the comments!

Tate McRae is only 18 and has already had SEVERAL hits on the radio, starting with You Broke Me First in 2020! This song has a video dropping next week, and the album has a tour kicking off in March! What do you think of “She’s All I Wanna Be”?

Tate McRae: She’s All I Wanna Be

Lauv completely threw out his process for creating when he wrote his new album! 26 is about how FAME doesn’t equal HAPPINESS! What do you think about it?

It has been TWO YEARS since the Chainsmokers released new music… was “High” worth the wait? Listen to it here, and then let us know what you think, should we play it regularly?

New music tends to drop on Fridays, so it seems to make sense that we showcase it on Fridays, TOO! So for the very first Friday edition of Traffic Jamz, I went with Anitta- Boys Don’t Cry. It’s REALLY different than the Anitta you’ve heard before, this one definitely has a pop/retro vibe… the synth is DEFINITELY revived, now! Listen to it and tell me if you want it to play more on our station!

24k Goldn laments about longing for a girl who doesn’t really have the same feelings for him! What do you think about “More than Friends”?

Jena Rose’s Checkmate was inspired by The Queen’s Gambit. Jena realized that relationships could be like chess when she was in a toxic relationship, so this song is about taking your power back! Should we keep it around, or nah?

Charlie Puth has been teasing this one for MONTHS on all his socials, so now that it’s FINALLY here, what do you think? Thumbs up or down? Listen and comment with your thoughts!

Another NOT new song, but TikTok is really doing it’s best to give new life to previously unloved songs! Before you knew AJR from their songs “Bang” and “Way Less Sad,” they recorded and released “The Good Part.” And then, four years later, social media dug it up and made it a thing! It’s currently the most used Instagram song in stories, and it’s ALL over TikTok, so a month ago, they decided to make a music video for it, officially giving it new life! Here’s AJR’s not newest, but still most relevant right now song!

This song is not actually new. The Walters released it in 2014. They were a slightly successful indie band from Chicago until they broke up in 2017. But for some reason, TikTok found this song last year and it BLEW UP in popularity! It went so viral the band decided to get back together and immediately got a recording contract. SO for your NOT NEW new song, it’s The Walters, I Love You So.

The Walters: I Love You So

This song has a familiar vibe to it, you’ll instantly feel like you’ve heard it before. It samples 1970’s  “In the Summertime” by Mungo Jerry, and was featured on the Shang Chi and the Legend of the Ten Rings soundtrack.

Ed Sheeran has been working hard, cranking out new hits, AND is now on THIS collab, remixing a song from Nigerian singer, Fireboy DML. Here’s Peru (Remix). Let me know what you think in the comments!

For the FIRST Test Drive of  the new year, let’s throw out a BANGER! I feel like this one might blow up the clubs and be really big, but I’ve been wrong before! Plus, it’s not up to me to decide, it’s up to you! So… What do you think about When I’m Gone?

I truly love any of the JoBros and their sound lately. I was a bit too young for their first Disney-ish run, but every time we get a new song from them lately, it’s one of my favorites. Now this one isn’t ALL the brothers, just Joe, but I still love it. Thing is, it’s not about what I love, it’s about what YOU love, so what do you think? Keep it or nah?

It’s 4 days until Christmas, so this might play between now and then but it won’t play a lot. So let us know if you love it and we should play it NEXT year, or nah! Ed Sheeran and Elton John planned this song in 2020 to be released in 2022, and yet, here we are a few weeks from 2022 and they released it THIS year instead! What do you think? Share your thoughts in the comments!

This one is a Christmas song, so if you like it enough to add to the rotation, it’ll only be there for a few weeks! Honestly, it’s SUPER relevant right now, talking about wearing masks, keeping distances, and being in line for a booster this Christmas! But listen to the full song and let me know if you want to hear more of it on Y107 in the comments!

K-Pop is bigger than ever here in the states, thanks to BTS and other groups making HUGE waves in 2021. Monsta X is a K-Pop group and this song gives me total late 90s, early 00s feelings. Tell me what YOU think about “You Problem” in the comments!

I’ve got a new one off French Montana’s new album, They Got Amnesia, and he brought along a couple friends who are just on FIIIIIRE right now in the music world: Saweetie and Doja Cat! This is Handstand, I want to know what YOU think, should we add it? Do you love it? Or nah? Comment below!

Gayle’s ABCDEFU has the potential to become a breakup ANTHEM for anyone who broke it off with their significant other this year! “F you and your mom and your sister and your job and your broke down car and that stuff you call art.” I mean, who hasn’t wanted to tell someone to eff everything in their life (everything but their dog, anyway.) Check it out and let me know if you want to hear it more on Y107!

Today’s Test Drive is from Maneskin… they won the Eurovision competition, and now you have heard their song BEGGIN’ Everywhere! They’re an Italian Rock/alternative band… here’s their newest song “Mammamia.”

Last week when I heard Avril Lavigne released new music, I started the hunt for it for Test Drive! Who didn’t sing along to “Sk8er Boi” at the top of their lungs, honestly! Listen to “Bite Me” below and let me know what you think in the comments!

Red (Taylor’s Version) has already made ALL of the waves, from her ten-minute version of All Too Well reviving old Swiftie feelings about Taylor’s breakup with Jake Gyllenhaal, to the release of the Starbucks Latte (Taylor’s Version), and a whole short film thing. Needless to say, Taylor is TALKED about! So today we’re Test Driving her song Message in a Bottle (Taylor’s Version).

Ed Sheeran’s = Album is STRONG, with each song he’s released so far rapidly moving up the charts, so this seemed fitting to be the very first song played for a Test Drive! I love the upbeat sound about the nostolgia of an old relationship.

So what do you think? Leave a comment below!

Previous Uber Adding a Gas Surcharge
Next The Thing About Pam