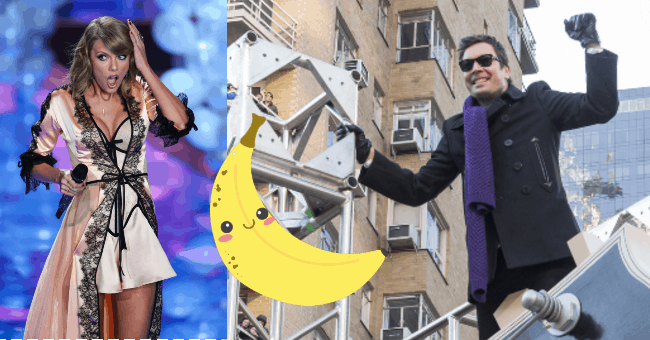 Taylor Swift has been floating high lately. Her lastest album, Lover,  has hit record sales numbers, the vinyl for it JUST dropped, she’s got a major tour coming, the singles are slaying, and she’s appearing on SNL this Saturday. With all that, there was NO WAY Jimmy Fallon would miss out on the chance to book her on the show.  But he had a couple tricks up his sleeve.

Things were going fantastic for start of the night as Taylor and Jimmy faced off in “Name That Song”. Taylor was killing it too, knocking out song after song! That was until the final song, worth “10,000 points”. (Quoting Taylor, “What does that even mean?”)

The complete confusion from Taylor, combined with the sheer embarrassment was worth every second. However, we’re kinda thinking it was staged, as he’s done this before.  She HAD to know one of her songs would be on the list, right?

Perhaps the SECOND burn was the best however.  We’ll go as far to say it was rather EPIC! During the interview, Jimmy suddenly, awkwardly, asked Taylor if she could “see him alright.” It was a confusing moment for us, and clearly for Taylor too. Jimmy then revealed Taylor had Lasik Surgery recently too, which Taylor wasn’t aware he knew. It was soon evident he was going somewhere with this, and Taylor didn’t look too comfortable. After what he did NEXT, we couldn’t blame her.

It got better as she reminded Jimmy she’s a “Two Drink Wizard” evident after she had the 2 mojito’s at a party earlier this year to wake up to #DrunkTaylor trending.  She wondered what hashtag would be trending for THIS? (Looks like she’s been spared this round.)

This will easily go down as one of the best interviews in a while. We were a little surprised she didn’t perform, but with the promotion for SNL, it makes sense.  She DID reveal she’d be playing “Lover” as one of the tracks on Saturday. As for the other track, it’ll be something she’s “never played live before.” Alright Swifties, which song is it, that she didn’t play at the “City of Lover” concert in Paris last month.