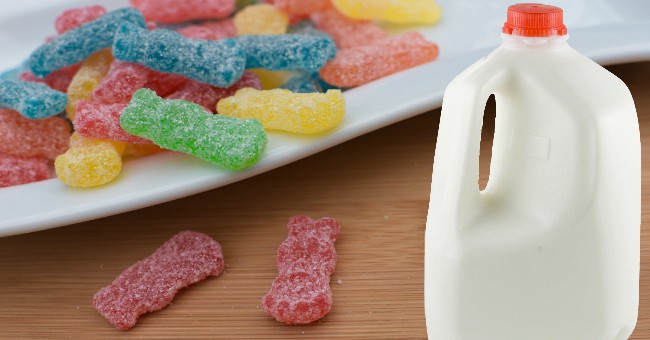 No, it’s not April Fools. The candy that’s sour, then sweet, is getting the cereal treatment. Sour Patch Kids cereal is a thing!

Let me start by saying I’m a HUGE Sour Patch Kids fan. I love all sorts of sour candies, and they are right up near the top of the list.  I’m also a big cereal fan. And cause I’m a DJ, meaning I’ve never really grown up, I’m also STILL a big sugar cereal fan guy.  Give me Reese’s Puffs, Cocoa Puffs, Cap’N Crunch (and ALL variations), Cinnamon Toast Crunch… the list goes on. You can keep the fruit cereals though: Fruit Loops, Fruity Pebbles, Trix… ick!

So maybe that’s my problem, as I’m guessing this would be a fruit-based cereal. I just don’t get how the sour part would work.

And more importantly…  WHY?!?!

I’ll usually try it before I knock it. But in this case, I just don’t think I can. Maybe if someone else has it, I’ll try a bite. Maybe.  Let me know if you see it around.

In the meantime, what’s the GROSSEST cereal you’ve ever seen/had?

Who did this and where can we buy it? @post_cereals #CerealGate

Previous Y107 Staff Does The Vodka and Milk Challenge! [VIDEO]
Next What It’s Like Being Post Malone For A Day!