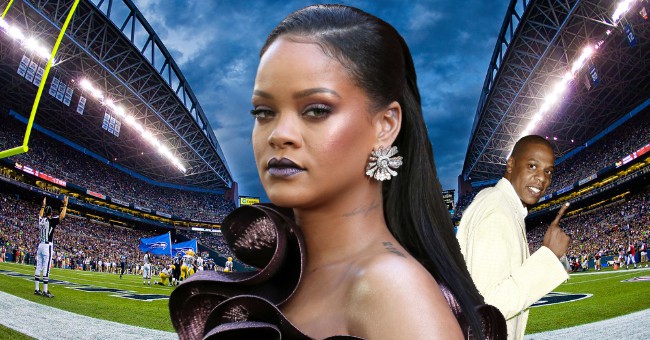 Major news in the sports and music world dropped yesterday, as it was announced Jay-Z’s Roc Nation will be taking over all entertainment endeavors for the NFL, which includes the Halftime Show. What could that mean?

Let’s state the obvious: the 2020 show will feature Roc Nation artists. Honestly, how can anyone think that won’t happen? So who’s all on the Roc Nation label?  Well, HOVA himself obviously. But also:

It’s no lie Rihanna has been off the music scene for a while, focusing on her Fenty beauty line. However, she continues to hint new music will be coming soon. Last December, she responded to a fan who asked for new music, with one word: “2019”!  In May, she confirmed the rumor it would be a reggae album.

While we don’t know exactly when new music is coming, we do know it’ll be here soon. So consider the timing… what better way to launch her return to music than with a MAJOR Nationally televised, most watched event?  And since her boss is now in charge of said show…

We’re calling it right now: Rihanna, DJ Khaled, Jay-Z, J Cole, with a Fat Joe throwback for THE halftime show.  BOOM!  (Heck, at this point, Beyonce might even join in.)

While we watch the rumors roll in, we’ll just wait for the confirmation sometime before the February 2nd event.

Previous Blame the wrecking ball for Miley and Liam’s split
Next FRIENDS 25TH: THE ONE WITH THE ANNIVERSARY