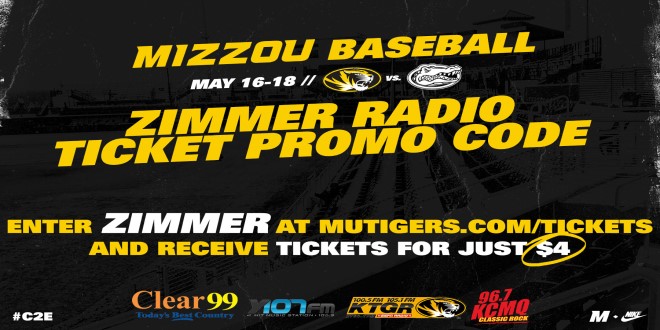 Y107 wants to help PACK THE HOUSE at Taylor Stadium Thursday, May 16 thru Saturday, May 18th when your nationally ranked Mizzou Tigers Baseball team takes on the Florida Gators!

The Tigers host the Florida Gators May 16th, 17th and 18th in Columbia, with a chance to play their way into their first NCAA Regional since 2012! Mizzou is offering a host of deals for you to head to the ballpark with your family and friends:

You’ll get four general admission tickets, four sodas, and four hot dogs for your family for just $25… half the cost of going to the movies! Go to MUTigers.com/tickets and select four tickets in the “4-Pack” option for any game to purchase.

A general admission ticket for any game of the Florida series is just $4 when you buy online! Go to MUTigers.com/tickets and enter promo code “ZIMMER” to unlock your $4 tickets.

Make a purchase at the Mizzou Tent Sale on May 18th and get a voucher to buy $3 tickets for that day’s baseball game at 2:00 pm! Head football coach Barry Odom will throw out the first pitch of the final regular-season home game of the year to help lead the Tigers to a big win.

The first 1,000 fans arriving at Taylor Stadium on Thursday, Friday and Saturday will get a raffle ticket for a chance to win a Mizzou Baseball Prize Pack full of cool Tiger gear! Make sure to stay until the winning ticket is called in the later innings… you must be present to win and claim the prize.

WE ALSO HAVE LOTS OF WAYS TO WIN TICKETS: