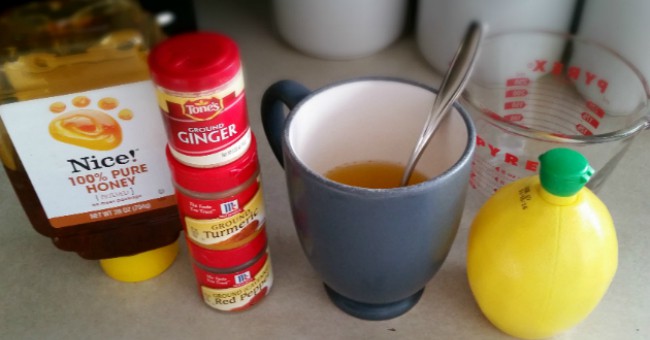 As I was saying on-air today, I caught a really nasty cold bug last week. It even took me off the air Friday as I had no voice. I probably spent half the weekend worrying I got Cosmo, JaX, or Jordan sick.

Here’s the thing; when I get sick, I have some interesting remedies I try, as I need to take care of my voice.  After all, as they say in radio, it’s my ‘money-maker’.  My co-workers laughed as I sucked down a half gallon of OJ Thursday, just one of my quirks. But there’s another one my family laughs at me for.

Years ago, I came across an “emergency drink”, called “Golden Elixer” or ‘Turmeric Tea’ as I’ve named it. I’ve been drinking this whenever I get sick for the past couple years now. It all started with a Today show interview with supermodel Rachel Hunter. They asked her what her secret is, and she swore by something called a “turmeric shot” to keep her healthy and feeling her best. In Today Show fashion, they all then did a “turmeric shot”, which Matt was excited about, as he was also fighting a cold, and this was supposed to help. So it got my wheels turning as I looked for a recipe. I had the ginger and turmeric is the spice rack, and had lemon juice and honey, and knew I’d find something. Eventually, I stumbled upon this recipe on MarthaStewart.com.  It’s Martha Stewart, so it’s got to be worth something, right? 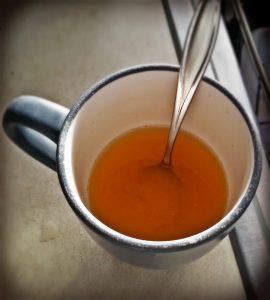 If you want to make it for yourself, it’s:

Combine it all in a cup of hot water.

So how does it taste? I actually enjoy it! Thanks to the honey and lemon, even ginger, I find it quite tasty. And the cayenne adds a kick, which almost instantly opens the sinuses, for instant relief.  The rest of my house dares not try it though.

There IS a trick.  First, stir all the ingredients nicely before adding the water. And then, make sure you keep stirring, as the powder doesn’t really dissolve, so it’s a bit gritty especially at the bottom.

Who knows if it really works or if it’s just an old wives tale, but if you do the research, so many swear by the health benefits of turmeric, including Martha Stewart, so why not?

Are you willing to try?