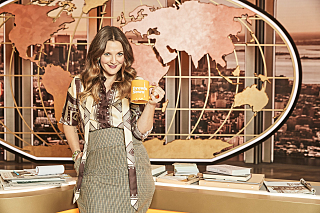 Michael Vartan Revealed Something About THE KISS From ‘Never Been Kissed’

The movie “Never Been Kissed” is 22 years old, but it’s STILL one of my favorite RomComs to date!

Drew Barrymore is a copy editor-turned-undercover journalist at a Chicago Newspaper, and goes undercover as a high school student for a story. Her favorite teacher, played by Michael Vartan, ends up with some feelings for her, thinking they’re inappropriate since she’s a student.

Anyway, it’s a RomCom, so you KNOW there’s a whole scene at the end where they kiss and it’s awesome!

Drew had a reunion on the Drew Barrymore Show with the “Never Been Kissed Cast.” Turns out, for 22 years, Michael Vartan has been keeping a story to himself about filming that scene, and it’s hilarious (and a little embarrassing for him).

Check out the story starting at 1:46, because I can explain it to you in text form, but it’s really funny listening to HIM explain it, and seeing the look on Drew’s face!