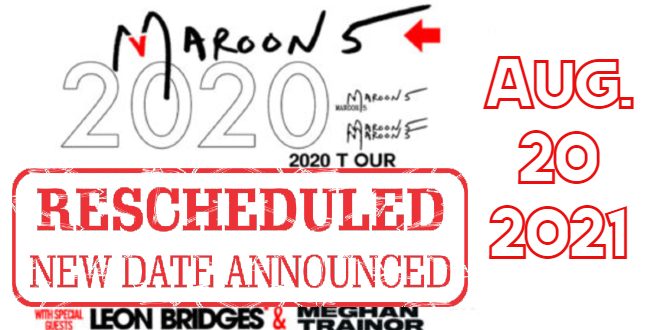 UPDATE: Maroon 5 has finally announced new dates for their tour continuing next year. Tickets for this year’s show will be honored then. The new date for STL is Aug 20, 2021, with the KC show scheduled for August 13.  Click the links for tickets.

(Previous) Maroon 5 has made the decision to postpone all 2020 shows, including the KC and STL shows. Tickets will be honored for the make-up date once announced.

We must announce that we will regretfully be rescheduling our upcoming 2020 tour. All dates currently scheduled between May 30th and September 17th, 2020 are being rescheduled for the summer of 2021. We are looking forward to having the opportunity to be back out on the road next year. “We want everyone to take care of themselves this summer and we really look forward to being back out with all our fans healthy and happy next year.” – Adam All tickets for the tour will remain valid and will be honored once new dates are rescheduled. Information on rescheduled dates will be announced soon. For additional tour and ticket information, please visit www.livenation.com, or www.maroon5.com.

Call it an early Christmas present: Adam Levine and Maroon 5 are returning to Mid-Missouri next summer! And they’re bringing Megan Trainor, who’s releasing her third studio album, Treat Myself, January 31st.  In other words, save some money for an extra stocking stuffer!

With the new single “Memories” burning up the charts, and Adam having left “The Voice” to focus on new music, everyone is eagerly anticipating a follow-up album to 2017’s Red Blue Pills which launched a mega tour. Now we know that follow-up album from three-time GRAMMY® Award-winning multiplatinum band Maroon 5 is inevitable, and the tour is headed outdoors this time around, including iconic stadiums like Wrigley Field, Fenway Park, Citi Field and Banc of California Stadium!