March MenNess is complete! We started with 64 of the hottest male celebrities. They were divided up into Superheros, Music Men, Movie Stars, and TV Stars, which was not easy as there were many overlaps. Through your votes, we narrowed them down to 32, then to the Sexy 16, down to the Epic 8, and then the Phenom 4.

The TV category featured a couple of tough face-offs, like the battle of the scruffy BA’s, when Charlie Hunnam was up against Jefferey Dean Morgan, or which Morgan moved on. The victory would be short lived as Morgan fell to “Agent Morgan” Shemar Moore in the next round. With 3 “This Is Us” men competing, there was a good chance the show would produce the TV Men winner. While Sterling couldn’t get put of the first round, Justin Hartley made a good run, upsetting Ian Somerhalder in the second round. He eventually fell to Chris Pratt. As for Milo, he won a close match over Scandal’s Scott Foley, but just couldn’t overcome the deficit to upset Jensen Ackles, supported by his fan club. While very strong for Jensen, the fanclub just couldn’t help him get enough votes to avoid the upset to Chris Pratt in the end, making Pratt the winner of TV’s Hottest Man. The fan club even protested Pratt isn’t a true TV star, and his run was helped by his Starlord power, thanks to the Guardian’s of the Galaxy. Even though Pratt hasn’t done TV since NBC’s “Parks and Rec” ended in February of 2015 (where he played goofy, dim-witted Andy Dryer), it was still his claim to stardom, and the listener votes had spoken.

From the get-go, this was easily one of the most contended brackets. 1 vote decided 1st round upset of 15th ranked Bradley Cooper over second ranked “Mr. Grey” Jamie Dornan. Cooper would go on to the sexy 16 before being knocked out by 3rd ranked Ryan Gosling. 13th ranked Mark Wahlberg also had a surprising run, beating out the winner over the hotly contested battle between Johnny Depp/Matthew McConaughey (which Matthew won by just 6 votes out of over 300). Ryan Gosling and top ranked Channing Tatum had fairly easy walk-ins to the Epic 8, where Gosling just couldn’t compete. Channing Tatum was crowned the winner as the Hottest Movie Man.

As the early rounds got underway, there were not too many surprises. The second round held a different story, as 6th ranked bald Dwayne “The Rock” Johnson beat out the lovely locks of 3rd ranked Jason Mamoa, while 8th ranked Captain American, Chris Evans, dominated the votes over top ranked “Black Panther” Chadwick Boseman. Chris Evans run wouldn’t last much longer though, as he proved to be no match for 4th ranked Ryan Reynolds, who steamrolled his way to the Epic 8, to face 2nd ranked Thor, aka Chris Hemsworth, who enjoyed an easy run. Thor would prove no match for Deadpool however, as Ryan Reynolds was crowned the Hottest Superhero.

Most wins in this category were pretty clear. Top ranked Justin Timberlake had no contest leading all the way into the Epic 8, even taking out 12 ranked underdog Luke Bryan, who dominated his first two rounds as well. It was a similar run for 3rd ranked Adam Levine, who easily walked into the Epic 8. But that battle proved to be the toughest of the tournament. After 324 votes, Adam would pull off the upset by just 2 votes to be crowned the Hottest Music Man.

As the Phenom 4 were revealed, it would be Adam Levine vs. Ryan Reynolds and Channing Tatum vs. Chris Pratt. Unfortunately for Levine and Pratt, it would be no contest in this face-offs. Pratt fell to Tatum by 120 votes, while Levine fell to Reynolds by 171 votes. By Monday morning, this meant the final two were top ranked Movie Man Channing Tatum vs 4th ranked Superhero Ryan Reynolds. Tatum kept pace to Reynolds throughout Monday. However, after almost 400 votes, he just couldn’t handle the power of the hysterical, sexy, confident “Deadpool”.  The vote was decided by 29 votes.

He’s the hottest male celebrity as voted by you, our listeners. 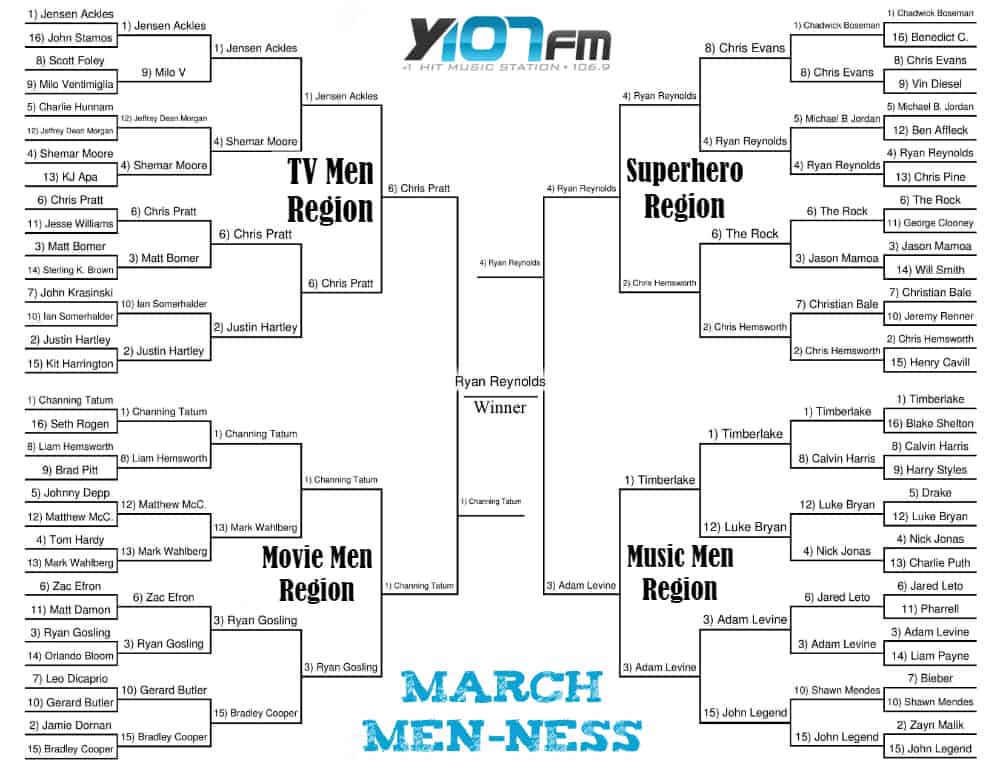 Did you enjoy the tournament? Was your favorite represented? Should we go for the rematch next year? Comment below and let us know.

Thanks to all who participated!