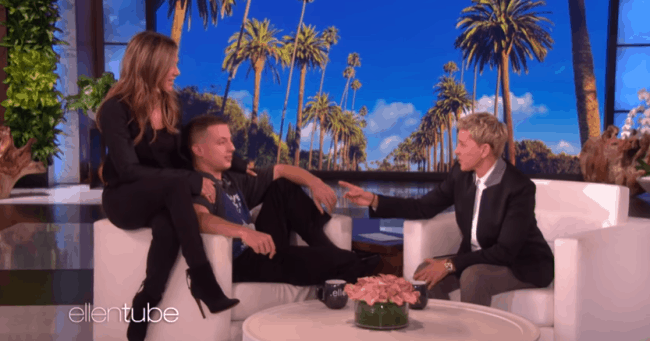 Soooo to say Charlie Puth is a Friends fan would be an understatement.  He admitted to Ellen he recently got to work with Courtney Cox and Lisa Kudrow on a project, but has yet to meet most of the guys as well as Jennifer Aniston. He was visibly nervous excited to be on the show with Ellen, as he knew Jennifer was also a guest. So Ellen brought Jennifer Aniston back out. And Charlie started full on “fangirling”. He more or less begged Jennifer to stay, and she obliged, sitting on the edge of the couch. And then he snuggled into her. But it got worse, as later, randomly, he blurted out, “This is my new girlfriend.” And then an awkward pause.

Honestly though, it was adorably cute. He was able to get an update from Jen as to what is going on with the Friends reunion everyone is hoping will happen. While she admitted there will NOT be a reboot, she added:

Listen, we would love for there to be something, but we don’t know what that something is, soooo, we’re working on something.

And of course Charlie had to plug he’d take care of the music. Just wait to you hear Ellen’s response when he volunteers her to sing the theme song with him.  What now?!  🙂