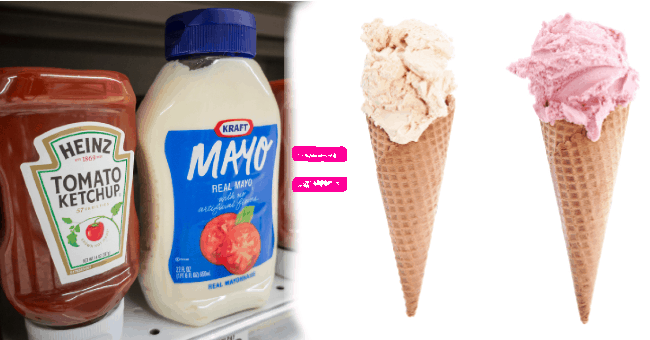 Nothing better to cool off with in summer than ICE CREAM!!!  But what about Mayo or Ketchup Flavored ice cream? It’s here, thanks to Heinz!

Heinz has done crazy things in the past. Anyone remember the blue, green, and purple ketchups? That was ODD, and not too appetizing to say the least. The flavor mash-ups they introduced last year didn’t really bother me. Heck, I’ve been making “Mayochup” for years! I’m still curious how “Kranch” tastes.

What I’ve never been curious about though: how ketchup or mayo ice cream tastes. However, apparently some people are. At least according to the marketing team at Heinz, as they have unveiled Heinz Creamz.

Bringing you the ultimate scoop, we present Heinz Creamz. A DIY ice cream kit and recipe, with an added summery squeeze…

As of now, it’s only in the UK. Which explains our confusion with “Salad Creamz” (not lettuce, but more like mustard/vinegar flavor) and “Saucy Sauce Creamz” (more or less Mayochup). More descriptions can be found here.

But regardless, would you even consider these? I like ALL these condiments. I’m a big fan of mayo as unhealthy as it may be. (Not MIRACLE WHIP… ick!) But I’d never even THINK about Mayo ice cream.

According to a Senior Brand Manager:

“This summer is looking different for many of us, and while we might be staycationing or staying at home more than in other years, it doesn’t mean you have to miss out on the joys of a good ice cream. Heinz sauces are here to help. We know it might seem like a bit of a crazy combo to some – but with Heinz always at the forefront of innovation, anything is possible.”

Innovation or just sheer insanity. That’s unclear at this point. However, if you want to try them yourself, you don’t have to be in the UK I don’t believe, as they are DIY kits, and the recipes are pretty simple. (Click here for all the recipes.)

3. Continue mixing until the mixture begins to form soft peaks (so when you turn your whisk upside down, the peaks are just starting to hold).

4. Gently pour the mixture into a freezer safe container. Leave to set in the freezer for a minimum of three hours.

So, who’s brave enough to try?  Let us know the result, I guess.