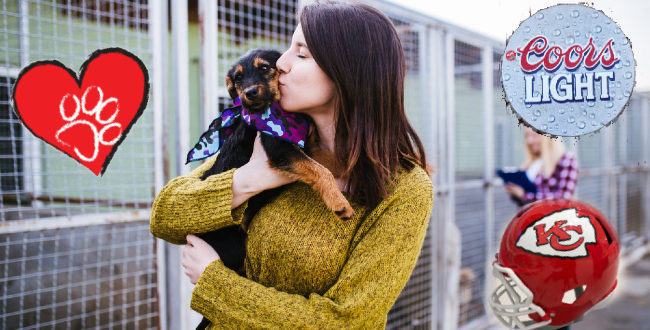 February Becomes A ‘Super’ Time To Adopt a Furry Friend

Forget cuffing season. Why not find a FUR-ever friend in time for Valentine’s Day. Nothing like snuggling up with kisses; puppy kisses! Thanks to Derrick Nandi and Coors Light, February just became the perfect month to adopt a furry friend.

It started right after KC won the Superbowl, as defensive lineman Derrick Nnadi made a big statement offering to pay the adoption fees for the dogs currently in the KC Pet Project Shelter. He said it didn’t matter how long it takes for them to be adopted. This is an increase to what he has been doing all season, as he’s paid the adoption fee for one hard-to-adopt dog after each Chiefs victory. All of the dogs in that program found homes. Imagine if that happens this time. On the first day, they doubled the amount of normal adoptions.

UPDATE: As of 5p today, February 7, only a few dogs remain. Rachel Ray has also now included free food for the rest of the year for all pets adopted.

But the generosity didn’t end there. Coors Light has followed suit, in even bigger fashion. Tuesday, Coors launched “Coors for Canines” offering to reimburse up to $100 in pet adoption fees for the first 1000 qualified people, through February 21. To qualify, you need to be at least 21, and text your receipt with key word “COORS4K9” to Coors through short code 28130 . They will reimburse you via Venmo.

Submitted adoption receipts must include adoption cost, name of the shelter and it’s location/state. It also must have the date and animal type on it, as this is only valid for dog adoptions.

We’ve featured so many awesome dogs as part of our Canine Connections feature. We also know there’s so many more furry friends looking for that furever home this Valentine’s Day. Why not take a look. You know you want to.

For full details on the offer visit the company’s promotion page.