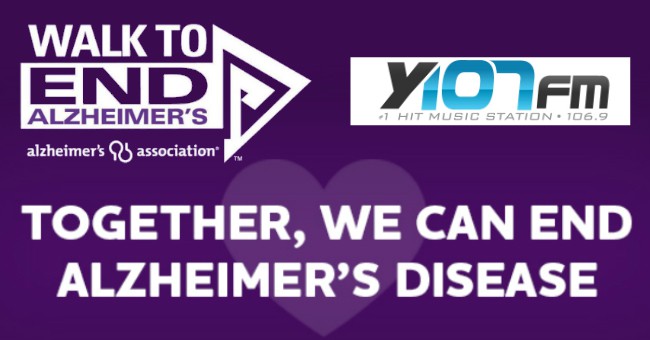 You know how sometimes you forget where you put something, or what you’re about to say?  Imagine that was your every day, for the rest of your life. That’s what living with Alzheimer’s is like.

Join Y107 and the Alzheimer’s Association of Greater Missouri for the Annual Walk to End Alzheimer’s on Sunday, October 14th. Individuals and groups from all over the area come together to raise awareness and funds for Alzheimer’s care, support, and research.

Walk to honor someone you know suffering from Alzheimer’s. Walk to prevent the disease from being a part of your future. Or just walk to support your community. No matter the reason, get your purple on, put your team together, and get ready to walk. Join almost 500 participants already signed up over 60 plus teams. Even better, know that every dollar you raise benefits those affected by Alzheimer’s disease in your community. Together, we can end Alzheimer’s disease.

Register for the Columbia walk here.

ALZHEIMER’S DISEASE IS AN EPIDEMIC

It’s the only cause of death in the top 10 in America that cannot be prevented, cured or slowed.

Almost two-thirds of Americans with Alzheimer’s disease are women.

One in three seniors dies with Alzheimer’s or another dementia.

Alzheimer’s disease is the sixth-leading cause of death in the United States.

More than 5 million Americans are living with the disease.

In the United States someone develops Alzheimer’s every 66 seconds.

You can do your part.