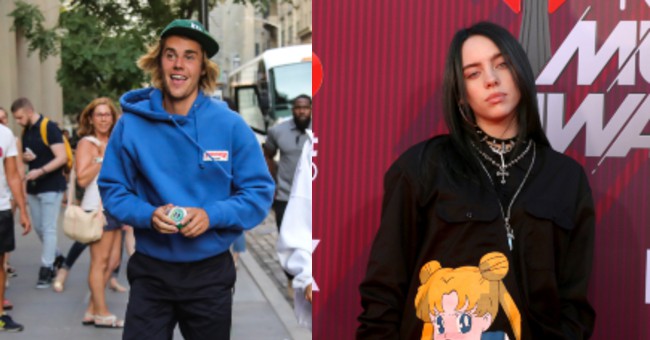 Yup, it happened! Billie Eilish got her dream wish and collaborated with her CRUSH Justin Bieber. However, is it really worth it?

We LOVED how star struck she was and just KNEW the two would one day collab, right? After all, she’s a huge Belieber who confessed to her obsession with Justin while on Ellen.

I had a big surprise for @BillieEilish (I ❤️ u @JustinBieber). pic.twitter.com/lWhmhr2ahX

And he’s a big fan of hers too! She just told Billboard he DM’d her recently to talk about a collab.

Well the day has come.

After a “Remix” tweet-tease from Justin on Monday, followed with a retweet from Billie’s producer/brother, followed by an IG story from Billie about “something coming”, fans speculated the two had something up their sleeve. Indeed they did.

Justin appears to be a big fan of Billie’s “Bad Guy“. (relate much Biebs?)  So the two got together with him adding a second verse, as well as random jabber over other parts of the song. And that’s where we’ll leave it. (Take a listen below and enjoy the photo of young Billie in her “Justin-themed” room.)

Not going to lie, he certainly adds very little to the song. We’ll hold our breath for an original duet/collab from them that better fits both of them.  This just didn’t work for me. However, we’re stoked Billie got an awesome chance to work with her dream crush.  Too bad he’s married.

Previous Queen B drops epic ‘Lion King’ song
Next Yay! Kids in Missouri will get longer summers starting in 2020